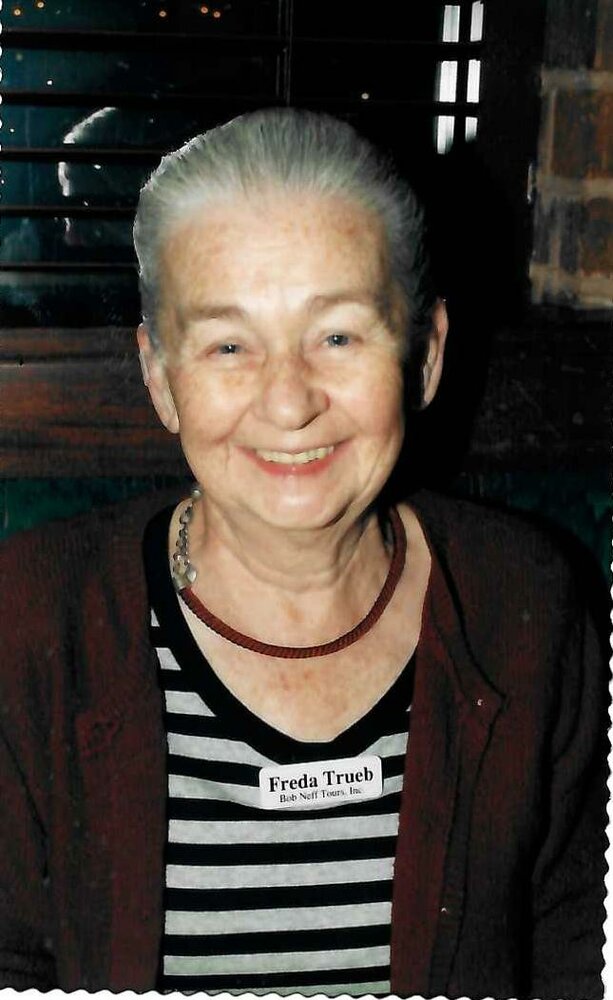 Please share a memory of Freda to include in a keepsake book for family and friends.
View Tribute Book

Freda Trueb, 84, passed away Saturday, February 5, 2022 in the Zerbe Sisters Nursing Center and was greeted with the open arms of Jesus and her late husband Henrich Trueb.  She was born January 10, 1938 in Spring City to the late Amos and Arvilla Shenk Bechtel.  Freda married the love of her life, Heinrich, on September 9, 1967.  She lived in Switzerland from September 1967 until May 1970.

Freda was a lifelong member of the Vincent Mennonite Church where she taught Sunday School, Vacation Bible School and served as the church secretary for nearly 20 years. In later years she attended High Point Baptist Chapel in Giegertown, PA.

Freda began guiding tours to Europe for Perkiomen Tours in 1985 and then from 1990 until July 2010 she guided tours to Europe, Canada, and the United States for Bob Neff Tours.  She and Henry traveled across the Atlantic Ocean more than 50 times.

Freda enjoyed pen & ink drawing, playing piano, baking and cooking, and taking care of her flower gardens and yard.  Most importantly she loved spending time with her family.

In August of 2010 Freda was diagnosed with Alzheimer's disease and in 2015 she went to live at Zerbe Sisters Nursing Center, Narvon, PA.

Private visitation will be from 10:00 am – 10:30 am.  Service to begin at 10:30am. Burial will be immediately following at the Vincent Mennonite Church Cemetery.

Livestream of the service can be found at https://bit.ly/3snYLxQ

In lieu of flowers donations can be made to Zerbe Sisters Retirement Community Activities Department.  Address:  2499 Zerbe Rd., Narvon, PA, 17555.

Online condolences and a link to the service can be made at www.sgsfuneralhome.com. All arrangements are being handled by Shalkop, Grace & Strunk Funeral Home, Inc Spring City, PA.